A Must Read Book: Blink – Life After Locked In Syndrome

Six years ago this September, a very good friend of ours went for a routine chiropractic neck adjustment. On her way home from the chiropractors, she suffered a series of violent strokes that left her unable to move, swallow, or talk.

The neck manipulation had damaged arteries in Sandy’s neck and she almost died. Instead she became a prisoner of locked-in syndrome; aware of the world around her but only able to communicate by blinking her eyes. 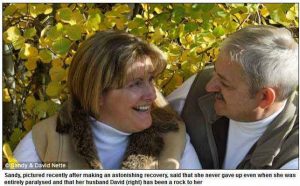 A riveting and inspiring book about her journey back

We are neighbors and good friends of Sandy Nette and her husband, David. They have just published a must read book based on this incredible 6 years of their lives.

The book’s jacket says it all

Blink: Life After Locked In Syndrome is the remarkable true story of a young woman’s courage, strength and determination to beat the odds. It is also an exceptional tribute to the power of unconditional love.

In the blink of an eye, everything can change.

Barely in her forties, she’d been cast into a living hell. But neither Sandy, nor her devoted husband David, were willing to accept this cruel fate and together they began to fight for their future.

David Nette narrates the events that tore him and Sandy apart and then brought them closer than ever, sharing the trials and triumphs of their unique relationship, one always filled with humor even in the darkest days.

Blink: Life After Locked-In Syndrome is a story that may just change your life.

Joanne and I contributed a testimonial for the book

This is what we had to say:

This is a story that everyone needs to read. It is a cautionary tale, a motivational story of trials, courage and triumphs but mostly it is a love story. An inspiring love story about a man and woman whose commitment and love for each other serves as a touchstone and example for our own relationships. 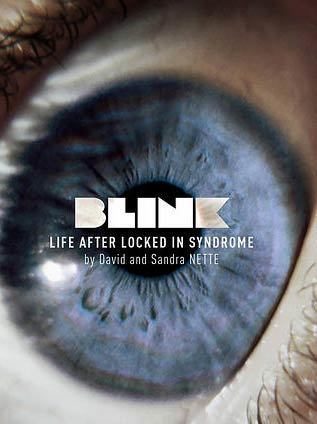 Their book is available through GoodReads and on Kobo.

A hardcover version of Blink: Life After Locked In Syndrome is available through Amazon .

Their story has been aired on TV and with the publication of their book, the world media is covering their inspiring story.
Here is a link to the UK’s Daily Mail Newspaper article along with many photos of Sandy and David Nette before and after their ordeal.

We cried, we laughed

Sandy and David’s journey will make you laugh, make you cry and come away with a renewed commitment to your life and family and to savoring each day as the gift it truly is.