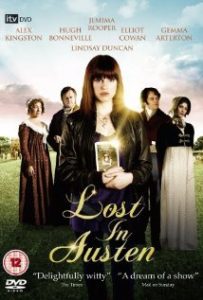 Where did our movie reviews go?

We’ve had a few loyal readers wondering why we don’t do our movie and book picks anymore. This summer we didn’t watch many movies but recently we got Netflix and now we’re making up for it big time. (We’re really impressed by Netflix’s range of documentaries, TV shows and movies. Also Netflix groups its offerings under easy to navigate genres including ones with “strong female leads” like the movie picks below.)

For all the Jane Austen fans, we saw a terrific movie, actually a 4 part TV miniseries (you’ll wish would never end) from Britain called Lost in Austen. Click here to see an intiriguing trailer. (As a sci-fi fan I loved the time travel element to this fish out of water movie.)

Pride and prejudice with a major twist

Imagine a spunky modern young woman who loves Pride and Prejudice and fantasizes about Mr. Darcy. She suddenly finds herself transported into the book where she must arrange the “right” ending and avoid stealing Darcy for herself. The movie is warm, engaging and full of neat little Pride and Prejudice elements, but you don’t have to know the novel to enjoy it.

You won’t want it to end

We’ve watched most versions of Pride and Prejudice, but this provides a delightful unique twist on the story. As corporate image consultants and etiquette experts we loved the business around differences between new manners and old etiquette as well as the dress, gender and social issues that stymie the modern protagonist. And it’s a delightful love story.

Four thumbs way up (two from Joanne & two from Terry)

The other classic-based film that we really enjoyed was the newest version of Vanity Fair starring Reese Witherspoon as Becky Sharp. As the lone American in this British production, she really holds her own against a superb cast of British character actors. The film is occasionally uneven in its 135 minutes, but does a fine job of compressing this captivating novel. Click here to see the fascinating Vanity Fair trailer.

A great story about the trials of a 19th-century governess fighting her way up the social ladder in a society where independent women are under tremendous disadvantage. Reese plays Becky in an understated way, a fighter with shades of gray. You can’t help rooting for her as she conspires and scratches her way up and down to the goals she sets for herself.

Even today we’re not immune to pride and vanity and their consequences in our social interactions. From a business etiquette point of view, the film highlights the vanity in ourselves and others and how prejudging people based on their status in our society can make us lose sight of their true value as human beings and what’s really important in life. Again you don’t have to know the book to enjoy this movie.

What have you been watching?

Share your suggestions, hits and misses. Btw, Joanne is just starting the book, The Help and wonders what people have thought of the movie version. We promise we will be blogging about our latest book picks shortly.

TERRY PITHERS Canadian speaker, humorist and business etiquette expert. If you are interested in booking me for a presentation, keynote or workshop, contact me. Based in Calgary / Edmonton, Alberta in western Canada.

Previous Post Are Hats Inside the Office Okay? Next Post These Boots Are Made for Walking… Street Walking That Is

Last day to save on registration and Power Up Your Personal Brand. Hope to see you there! https://t.co/ug1DNLzAGD
h J R
Follow @styleforsuccess