Things You Should (and Should not) Do via Videoconferencing

(I was interviewed for the following article on video-conference tips and advice written by Christine Wong, kindly shared from Allstream’s expertIP blog site.),

An executive coach walks through the unspoken etiquette of common scenarios 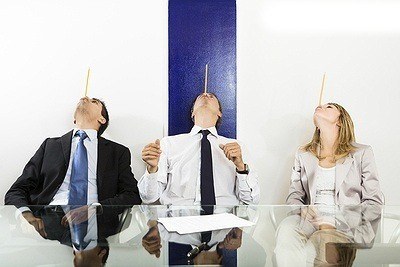 Mobile devices, webcams and videoconferencing apps are so accessible and affordable now that workers and managers can conduct business meetings from anywhere.

But should they?
Is there ever a professional situation when videoconferencing is Just So Not Appropriate? I put that question to Joanne Blake, an executive coach, corporate image consultant and business etiquette expert in Edmonton, Alberta.

I asked her if videoconferencing is ever appropriate for …

“At the initial stages where you’ve got a number of candidates, for the first round of interviews I don’t think there’s anything wrong with that,” says Blake. “But when it comes to making the final hiring decision, there’s nothing like face-to-face.” It’s only fair to meet the final candidates in the flesh because “some people are more comfortable in person than on video,” she says.

Videoconferencing is already being used to fill jobs. In a 2013 survey conducted in 12 countries, about 30 per cent of business decision makers in the U.S. and Asia-Pacific said they already used or would use it for hiring and recruiting.

Blake feels video interviews are more acceptable for hiring employees than recruiting senior managers, however. “If you’re seeking someone for a leadership role you definitely want to meet face-to-face.”

No way, says Blake. “That’s gauche. That’s a cop out. That is smarmy. It’s people’s lives you’re dealing with,” she says. “Remember that movie with George Clooney, ‘Up in the Air’? That didn’t work out too well, did it?” she recalls.

I found a clip from the movie online where Clooney’s and Anna Kendrick’s characters deliver a layoff notice to a longtime employee via videoconference. Blake is right; it didn’t go so well. I won’t embed the clip here because the Laid Off Worker Guy’s hysterical swearing and crying may be a bit much for some of you.

For real-life proof, look what happened with AOL CEO Tim Armstrong in 2013. Since he was about to inform 1,000 employees of huge layoffs during a conference call, Armstrong was understandably stressed out. But as the conference call started, he noticed Abel Lenz, creative director of AOL’s Patch division, holding a camera near him. As Lenz snapped a photo, Armstrong snapped too, firing him right on the spot.

The leaked audio is cruel and cringe inducing. It made Armstrong (who later apologized) look like a callous corporate monster. Okay, so this was not a typical HR meeting. And most managers wouldn’t give one worker their walking papers during a call heard by 1,000 people. But if this incident came off so poorly in a conference call, imagine how much worse it might have seemed during a videoconference.

Blake says video technology may come in handy for these, especially when managers must conduct reviews with workers posted far away. In some cases, “it’s better than having a phone conversation,” she adds. Ultimately, though, “everything depends on the individual (employee) and how they feel about it,” says Blake.

The same advice may apply to other instances where you’re tempted to use video technology for a meeting. Do you want to discuss a business opportunity with a potential partner? Make a sales pitch to a prospective client? (In the 2013 survey, 38 per cent said they used or would use video to pursue new business.) Get a supplier to demo a product for you? Train employees on a new system?

There are no hard rules about using video for any of these things. So you can just ask the people who’d be on the other end of that video link “how they feel about it” first. Once you find what tends to work best for your staff, customers and business associates, developing a policy for video use might be worth pursuing.

About the author / Christine Wong

Have you got a video conference story to share?