7 Tips to Increase Your Visibility to Get Ahead 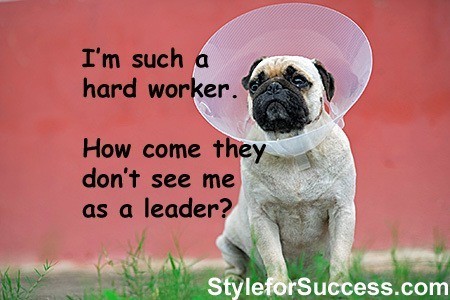 When I asked an aspiring leader what she was doing to advance her career, her response floored me.

I was coaching a client; an accountant in her mid-30’s who is brilliant at the technical part of her job. More than anything she would like to be a manager and eventually a partner in her firm. But she sees others getting promoted ahead of her in spite of her talent. So I asked her, “What you are doing to increase your visibility and be seen as a leader?” Her response floored me.

She said she works harder than anyone else, rarely stops for coffee and almost always eats at her desk. She went on to say that management should be taking note of her hard work and reward her with a promotion. This reminds me of the saying, “If a tree falls in a forest and no one is around to hear it, does it make a sound?”

Hard work is essential and a given, especially in the early days of your career. But when you’re seeking to move up the ladder into a leadership role you need a different set of skills. Your ability to raise your profile, network, mentor and support others becomes critical to your success. These are leadership skills. A great example of this is Franklin Delano Roosevelt.

I was watching a fascinating documentary on Netflix by Ken Burns on Franklin D. Roosevelt’s amazing 4 terms as president of the United States. He was not particularly popular as a kid and later on in life, he was diagnosed with polio and paralyzed from the waist down. But that didn’t stop him becoming America’s most influential and popular leader.

Along the way, he acquired the people skills that enable you to increase your visibility and helped him succeed as president. It wasn’t his brilliance that led him to that role, but his likability, compassion and connection with others that resonated with Americans during the darkest days of the depression and WW2. He was an amazingly hard worker but he didn’t close himself off in his ivory tower or hide his light under a bushel.

No matter what he was going through, he always had an infectious smile, and radiated positivity. He and his wife Eleanor, his biggest supporter, traveled, networked and campaigned tirelessly for the American people. He was able to rally his Democrats and Republicans and the country around him.

No more lunches at your desk

So my advice to increase your visibility to my accountant client was to get out there network and talk to people over coffee breaks and never to eat lunch alone at her desk. She protested that she didn’t drink coffee. So I suggested that she drink tea instead, whatever it took to begin to forge those critical relationships so that her peers and partners could begin to see her as a leader, know her as a human being and not just a working machine.

My top 7 tips to increase your visibility as an aspiring leader and get ahead:

If you wish to project executive presence and raise your visibility and profile, sign up for our newsletter or join us for one of our Complete Professional seminars.